Description:
Sure to be a frighteningly fun time for the whole family! Put on your costumes and join LCA and your fellow neighbors for games, balloons, crafts, and music! Bauler Park Corner W. Wisconsin & N. Cleveland Avenue 3:00-5:30pm This neighborhood event is sponsored by the Lincoln Central Association (www.lincolncentral.org). A $5 donation per family will support the neighborhood park fund. Rain date: October 27 See you at the Howler at Bauler! 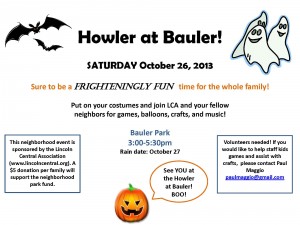